Published on In
Made Here Press Scott Eastwood

“We sat right at that table and that was the first time we ever met, and the first time we ever tasted the beer together, and we were shipping it the next week,” Bryant said, pointing to one of the Aspen Tap patio tables at their Saturday launch party. “It’s been a crazy turn of events. You don’t often get partnerships and friendships with movie stars to align. And it’s not about money or other stuff. We are doing this because we love it.”

Bryant is the CEO of Legacy Breweries — operating under the offshoot High Country Brewing LLC name — which in fall 2019 bought Aspen Brewing Co. that runs Aspen Tap in downtown Aspen. He recently partnered with Chapin — as well as his wife, Katherine — a California-based entrepreneur who calls Aspen his second home, as well as actor Scott Eastwood, son of famed actor and director Clint Eastwood, to bring the “Made Here Beer” brand to life.

Among their other endeavors, the Chapins are responsible for many versions of the board game Monopoly, including the Aspen edition.

“I’ve started a lot of different businesses. I had this crazy idea five years ago to create a company that celebrates America at its best. One thing led to another and we came up with the idea of ‘Made Here,’” Dane Chapin said. “More than 90% of all beer consumed in the U.S. has some foreign component to it, whether it’s foreign-owned or has foreign ingredients. So we wanted something that really pays respect to the American worker, all they do and all the hard work. There is nothing more celebratory than beer.”

Eastwood, a fellow Californian who became friends with Chapin through a few real estate deals many years ago, is the other half of the “Made Here” company that focuses on creating 100% made and manufactured American products. The creation of a beer brand under that label is their most recent step, and Aspen is center stage.

Because Chapin has no background in brewing beer, he partnered with Bryant back in November to make it happen. The “Made Here Beer” is mostly made in the Aspen Brewing Co. brewery located at the Aspen Business Center, with a second brewery located in Denver to serve the Front Range.

“We got a pretty amazing product that we are all really proud of,” Eastwood said in a phone interview with The Aspen Times on Saturday. “Dane and I go way back. … He was going to celebrate America by building a company around American manufacturing and keeping it all here. I really loved the idea and the concept. So we went off to the races. Beer was sort of a next step, because what is more American than beer, and we both like beer.”

Read the rest of the article at the Aspen Times website!

Comments are off
Published on In
Made Here Projects Scott Eastwood

Why Scott Eastwood Is Launching His New Beer in Colorado

New Country 99.1 interviewed Scott about his new beer and why Colorado was the perfect place to launch it.

Comments are off
Published on In
Projects Scott Eastwood 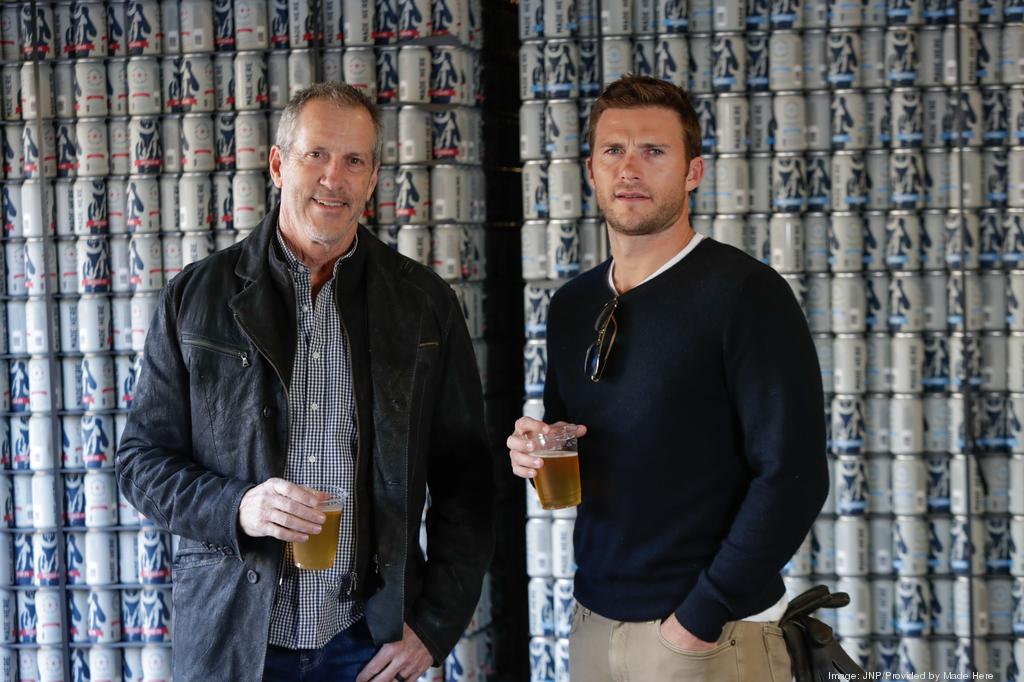 Aspen Brewing Company is currently brewing Made Here Beer and is being sold exclusively in Colorado for the current moment.

The company’s portfolio includes American Lager, American Ale and American IPA — each made with 100% U.S. ingredients and created entirely stateside.
Made Here Beer announced its launch in Colorado. Partnering with Legacy Brewing, the company has formed Good Times Made Here, which will brew, distribute and market Made Here Beer.

The suite of Made Here products includes American Lager, American Ale and American IPA — each made with 100% U.S. ingredients and created entirely stateside. The brand is enthused to celebrate and honor America at its best by partnering exclusively with American suppliers in every aspect of the brewing, canning, promotion and selling process.

A little-known fact: In the U.S., nearly 90% of all beer consumed domestically is foreign-owned, leaving a void in the marketplace to deliver an American-branded beer that is truly American-owned and can lay claim to using exclusively American-sourced raw materials. Adding luster and star power to this venture is the ownership and involvement of actor Scott Eastwood.

Eastwood is a co-founder and equity partner in Made Here Brand. He will lead multiple efforts to promote and market Made Here Beer throughout the country, with a series of in-person activations anchored with appearances by Eastwood.

“At Made Here our values are clear, so our decisions are easy: we create quality products and bring them to market by partnering with 100% American suppliers that use 100% American ingredients and labor” said Eastwood. “From the cans we order, to the hops, yeast, and malts we use in our brews, every step of the process is truly done right here in our country. I’m proud to say this is a uniquely American beer — and brand — through and through. We couldn’t be more thrilled to launch Made Here in Colorado.”

Sticking true to this moral, Made Here Beer enlisted the help of American suppliers, Country Malt and Yakima Chief Hops, to maintain the high-quality, domestically sourced needs for each beer. Each and every Made Here touchpoint — from pint glasses, coasters, merchandise and swag, is also 100% American-made. As more and more consumers continue to explore the roots of the products they are purchasing, Made Here Beer is well-positioned as a shining example to those interested in the fast-moving and wide-sweeping trend of U.S. supply chain transparency and awareness.

“We are so fortunate to have assembled a team of people who are extremely passionate about creating quintessential American beers,” said Co-Founder Dane Chapin. “Joining up with Legacy Brewing, working with Scott and partnering with like-minded suppliers has been the perfect lineup for making this dream a reality. When we say we are excited to launch this on the heels of American Craft Beer Week, we mean it. American-produced is in our DNA, and it’s in our name: Made Here.”

Made Here Beer encourages all Coloradoans to grab a case before the next big all-American adventure. The beer is exclusively distributed by Elite Brands in Denver and High Country Beverage in Grand Junction.